While I have already written about the natural wonder that is Milford Sound, the journey to it was nearly as magical. With many places to stop, the Fiordland National Park is the perfect place to spend a day exploring the bush. There is a chunky list of things to do en route to the Sound, but alas, we only had time to do a few. The ones we chose at random were The Mirror Lake, another one I can’t remember, and Lake Marian.

From Te Anau, it is a 120km drive up to Piopiotahi, and the views on the road are quite spectacular. The change in environment as you make your way are noteworthy. You come from open town, through forest and bush, through towering mountain ranges and to the still lakes of the Sound. This route can be fairly treacherous though, and there are a number of reasons why. The snow, ice and possibility of rock slides can cause issues, but I think the biggest issues come from the pesky Kia’s. These large mountain birds are known by many to be extremely peevish. The first one we saw we got out of our cars and had pictures next to. We will never make this mistake again. This crafty little bugger was acting as a decoy while its friends tried to pinch our belongings from the top of our car. I imagined it with the Italian Job or Mission Impossible music going on in the background while they made there great heist. “I only told you to peck the bloody doors off!”, he squawked.

Our first stop was at the Mirror Lakes. While you can see a mirroring effect on the Sound itself, it wasn’t quite as motionless as this one. It is relatively small, but the gargantuan mountain overhead shown in the lake is a sight to behold. One does wish that the lake was larger to gather a greater image of the mountain, but it is still very cool.

Next, we stopped at a trail described as a beautiful waterfall. The problem I have here is that I cannot remember what it was called. I have tried and tried to think, but to no avail. It is definitely one of the points between the Mirror Lakes and Lake Marion (but this doesn’t really help because there are quite a lot in the middle of them.) While I cannot remember where it was, I certainly remember that it was indeed beautiful. It offered a picturesque creek and a stunning waterfall. As the water came down it looked like silk on the back of the smooth dark rock. Mixed with the hearty greenery of the bush, it is worth checking out. (Even if this does mean you have to have a guess where it is) 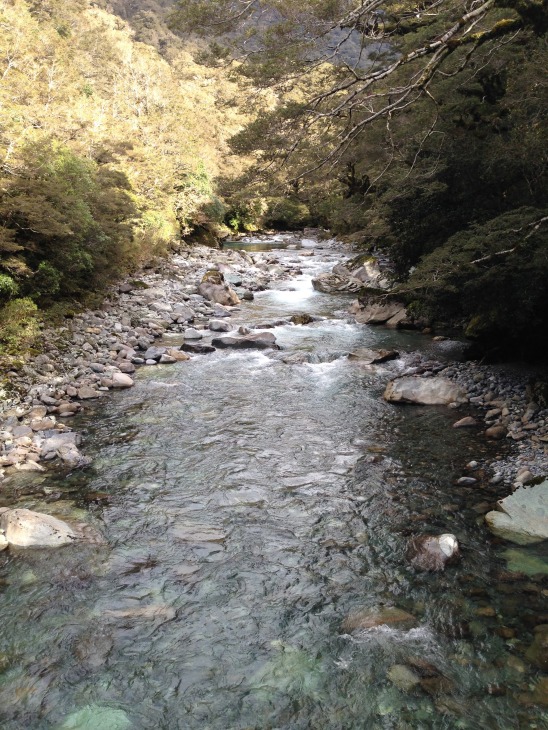 Our final stop on the journey was Lake Marion. On this occasion I have saved the best for last. What a treat to stumble upon, and we didn’t even walk the whole trail! You first cross a swinging bridge over a creek, and then it is a steady ascent up and then back down to the lake. We were strapped for time, so we only got the chance to walk for around 40 minutes. On the incline, you walk along the running stream and pass waterfall, after waterfall, after waterfall. Each more stunning than the last. There is something very soothing about the noise of falling water as you stroll through the bush. We had to shoot back to the car as we were going to the glow worm caves later that afternoon, but how I long to see the end of that track. It was wonderful. 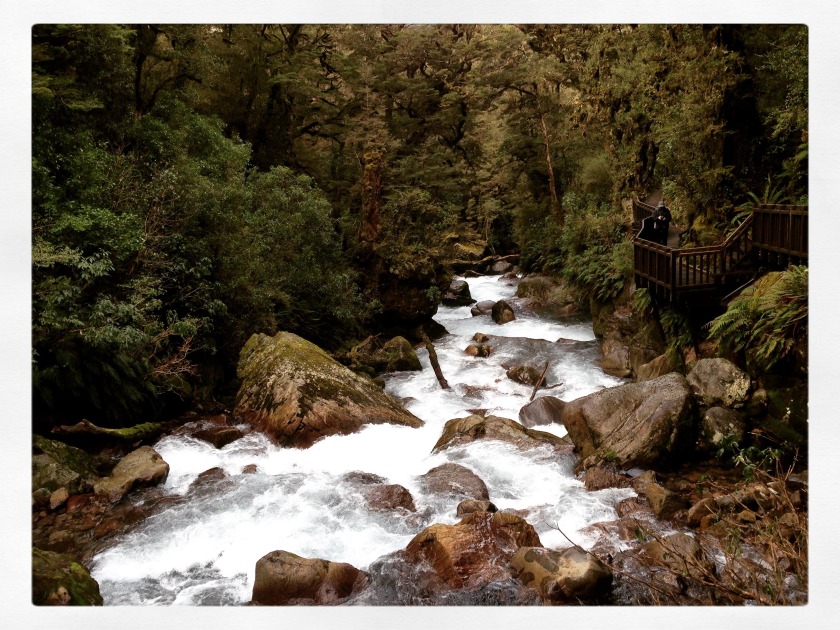 All in all the journey to Milford Sound was nearly as delightful as the place itself. While it is great to be ferried around on a boat and leisurely gaze upon the mountains in the Sound, it is another thing to strap on your boots and explore yourself. I think the trip highlighted for me that I am the type of person that enjoys the latter much more. We will be traveling back here soon to visit the other possibilities on the journey to the Sound, and I can’t wait to tell you all about it. (I may even find the name of the forgotten waterfall)

A Yorkshireman in New Zealand finding out what's what. Reviewing the odd beach, trail, etc. View all posts by Scrutineeringstuff

20 thoughts on “The Road to Milford Sound”

This is a text widget. The Text Widget allows you to add text or HTML to your sidebar. You can use a text widget to display text, links, images, HTML, or a combination of these. Edit them in the Widget section of the Customizer.
Loading Comments...
%d bloggers like this: